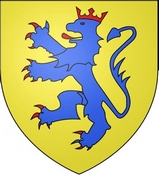 History of the castle of Lutzelbourg

1 15th century barbican: advanced defense structure for a bridge or a gate built in front of the ditch
2 Big tower that covers the entrance with two marks of jobbers
3 Tower that covers the ditch on the west side of the barbican
4 Pier on which the drawbridge rested constituting a point of support
5 Basement of the tower
6 Entrance tower rebuilt in the 20th century: gate of the bishop of Metz
7 Narrow entrance corridor with guide rails for carts (carriage transport)
8 Primitive entrance from the 11th century through a powerful gate tower
9 Small building with a 15th century sink corresponding to a kitchen
10 Powerful outer wall of the southern front
11 Square tower called Fénétrange from 1160, 25m high, walls 2.4m thick on 3 levels, the base being the jail, defensive wall at the level of the 1st floor
12 Building reinforced by a cylindrical tower
13 Current path with a false door
14 Small barracks from the 15th century which overlooked a postern: small hidden door leading to the ditch
15 3-level pentagonal tower for the 15m high habitat which is square inside with walls of 2.5 to 5.75m and with a wooden balcony and a roof
16 Several residential buildings opening onto large bays to the west
17 Villa Koeberlé Romanesque style on the foundations of the old atrium: knights' room
18 Romanesque building with several state rooms from the 12th century
19 Romanesque building partly cut into the rock
20 Building rebuilt in the 20th century with an open fireplace